Click Here to Read Our Q1 Commentary in a PDF Format

“Stocks aren’t cheap and popular at the same time.” - Unknown

We hope all is well with you and your family. As always, we will provide our thoughts on the events that happened this quarter and share our broad asset allocation ideas and concerns. From the investment perspective, this quarter was all about the rotation from growth- to value-oriented stocks. There is no universal distinction between these two categories, but value stocks tend to be in more mature industries and can usually be purchased at lower multiples. Surging COVID vaccinations improved the optimism for a faster economic recovery and accelerated the rotation. Some even describe it as a rotation from “stay-at-home” to “back-to-work” companies.

The table below summarizes the performance of various domestic equity categories over the past 3-month, 12-month and 3-year periods.

The first quarter of the year was full of significant political and market events. We started the year with turmoil and rioting in our Nation’s capital. Such exogenous events may result in significant short- and long-term impacts on the markets. In retrospect, as unsettling and unpalatable it might have been, the market’s reaction was rather tame. In late January, GameStop stock and short sellers captured the attention of many financial and non-financial observers. It was fascinating to see how quickly the story began to dominate the media with a clear emphasis on the “battle” between certain retail and institutional investors. The magnitude of this event does make it noteworthy, but a “short-squeeze” strategy is not new and can be frequently observed with smaller and more obscure stocks. We paid close attention to these events and shared our thoughts in our previous bi-monthly market update webinars.

The U.S. stock market continued to outperform the equities of most major developed and developing countries in the first quarter of 2021. Developed markets, as measured by the MSCI EAFE Index, were up +3.48% for the quarter. Emerging markets, as a group, increased by +3.57% for the same time period as reported by the FTSE Emerging Markets (EM) Index. Stocks of Chinese companies that represent more than 40% of the emerging market index were flat (-0.50%) for the quarter.

The investment returns of domestic fixed-income investments were much more problematic in the first quarter of the year. The yield on the 10-Year Treasury, which is considered to be one of the main benchmarks for overall interest rates, increased to +1.70% from +0.90% at the beginning of the quarter (+89% increase). Some of the reasons for such a significant increase include growing confidence in the U.S. economic outlook and, as a result, a higher probability for more inflation. Some economists believe this increase is reasonable and reflects the market conditions and expectations. We happen to agree with this opinion but remain cautious especially when we work with clients who prefer or need to maintain a significant percentage of their portfolio in bonds, as they would be impacted the most if interest rates continue to increase.

Bond prices tend to be negatively affected by rising interest rates, especially those with longer maturities. As a result, the Barclay’s Aggregate Bond Index, one of the most popular benchmarks for the domestic bond market, was down -3.39% for the quarter. Not surprisingly, the performance of other fixed-income categories was significantly impacted by their respective maturity date (see chart below for details). Below investment-grade bonds (i.e. “junk” bonds) were in the positive, +0.63%, for the quarter which is mostly explained by their shorter maturities and a tendency to perform well when the economic conditions are improving. 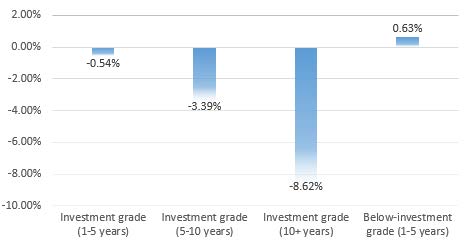 Our overall preference at this time is to underweight the allocation to bonds or match it with each client’s specific portfolio cash needs. Bonds and other fixed-income investments will continue to play an important role in overall portfolio risk management and diversification. When possible and appropriate, we prefer to review other alternatives with our clients and adjust the allocation. It is important to note that most bond categories provide limited protection against inflation. As a result, a scenario that includes rising interest rates and higher inflation will likely have a negative impact on bond “heavy” portfolios.

According to the latest Federal Reserve Bank meeting, the Fed rates are expected to remain at the current level, 0% to 0.25%, at least until 2023. Chairman Powell reiterated that this ultralow interest rate policy would be in place until the “maximum” employment is reached and inflation targets are “moderately above 2% for some time”. This statement, along with the continuation of the central bank’s monthly $120 billion bond purchases, is a positive factor for equity investors. This update, however, is not likely to be a positive for those who have significant allocations to bonds. There is a strong possibility that yields on shorter-term fixed income instruments (e.g. money market accounts and certificates of deposit) will remain depressed even if inflation eventually reaches the 2% target.

In terms of the economic updates, the latest Fed’s forecast for the U.S. gross domestic product (GDP) is at +6.5% for the year. Some banks and financial institutions project the GDP growth to be as high as +7.0% and even higher. If this turns out to be the case, the U.S. economy will experience one of the highest growth rates since the mid-1950s. We expected the U.S. GDP growth to be significantly higher than the average given the unprecedented expansion of the monetary and fiscal support that we have been experiencing over the past twelve months. The economic reports that we have been reviewing point to increased expectations throughout the first quarter of the year. We continuously ask ourselves how much of it has already been reflected in today’s equity prices and valuations. The chart below summarized the U.S. GDP growth from 1950 to 2020. 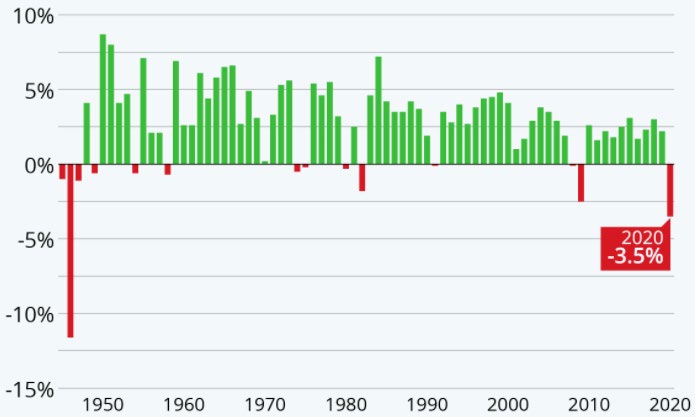 The U.S. unemployment rate fell to 6.0% from 6.7% in December of 2020. This is certainly a positive sign, especially when compared to the 14.7% that we experienced in May of last year. Some top economists, including Treasury Secretary Janet Yellen, believe the effective unemployment rate is closer to 10%. This “unofficial” metric takes into consideration a significant percentage of people who are not applying for jobs because they are discouraged or waiting for the offer that matches their specific skillset. It also includes people who dropped out of the labor force due to child care responsibilities caused by the pandemic. Perhaps the “unofficial” metric is a better indicator of the state of our economy given the extraordinary challenges and likely consequences on the labor force due to COVID.

The overall inflation rate as measured by the Consumer Price Index (CPI) has been gradually increasing from almost zero in the middle of 2020 to 1.70% as of February of this year. As we mentioned earlier in this commentary, the Fed’s plan is to allow the rate to go above 2% for some time. The assumption is that the central bank will be able to influence or even control inflation by using a wide variety of instruments at its disposal. Only time will tell if this actually happens, but those who have significant percentages of their portfolio in bonds will likely be at a “double” disadvantage if interest and inflation rates begin to increase at the same time.

For purposes of completeness, we wanted to include President Biden’s $2.3 trillion infrastructure plan in this commentary. This proposed amount will be used over eight years on critical infrastructures such as roads and bridges, telecommunications, schools and housing, research and development, and clean energy, including a plan to ramp up offshore wind farms. The proposal includes an increase in the corporate tax rate to 28%, up from 21%, and other provisions that would raise revenue for the proposed projects. As it stands today, the bill represents approximately 10% of the U.S. GDP. The final vote on the bill will likely happen this summer and we will certainly update everyone on the potential impacts in our quarterly commentary or periodic market update webinars.

In terms of our asset allocation strategy, we continue to believe that value-oriented equities provide more “value” than growth stocks in the current market environment. Many companies in this category are economically sensitive and tend to perform well when the economy is expanding (e.g. manufacturing). A rising interest rate environment is also a negative for some growth stocks, at least in the short-term, as many of them do not have strong cash flows and most of their earnings are expected to happen in the future.

Many emerging market stocks, especially Asian equities, performed exceedingly well in 2020. Centralized or more organized response to the pandemic, when compared to developed nations, is one of the main reasons for such performance results. We continue to believe that those parts of the world will generate significant returns in the future. As part of our disciplined approach, we are planning to gradually reduce the allocation to emerging market stocks in some of our managed portfolios. Some of the proceeds will be reinvested in European equities. Economies of many European countries tend to focus on more cyclical industries such as banking, manufacturing, and tourism and, as a result, tend to be more value-oriented and benefit from the same factors we described earlier.

Given the recent strong performance of more aggressive asset classes such as mid-and small-cap stocks, we already rebalanced most of our managed portfolios in January and February of this year. We strongly believe that these asset classes need to be managed and adjusted more frequently than more mature large-cap equities. Their performance tends to be move volatile and rarely lasts for extended periods of time. We will continue to maintain the allocations to these equities in our managed portfolios, but want to be more proactive when we see significant increases (or decreases) in their prices.

Please feel free to reach out to us if you have any questions about your overall financial plan or investment portfolio.