Click Here to Read Our Q3 Commentary in a PDF Format

We hope all is well with you and your family and that you are enjoying the fall season. As always, we will share our commentary regarding the important events that have happened this quarter as well as share our current ideas and concerns. From the market perspective, the 3rd quarter of the year turned out to be effectively flat for the U.S. stock market.  Large cap growth stocks were the best performers for the quarter. As we indicated in our previous commentary, many companies in this category have strong earnings and, as a result, are expected to perform well in times of market volatility. In terms of the sector performance, financial stocks turned out to be the best performers for the quarter. This sector is one of the few that would likely benefit from potential increases in interest rates.

Continued inflation concerns, interest rates, tight labor markets, Chinese equity markets and negotiations in Congress were some of the top concerns in the last quarter. We will discuss these issues and potential impacts in this commentary. In short, we expect many of the same issues to persist in the last months of the year and potentially in the beginning of 2022. This will likely result in more market volatility, especially given the fact that we have not experienced a “true” market correction, a decline of more than -10%, since March of 2020.

The table on the following page summarizes the performance of various domestic equity categories over the past 3-month, year-to-date (YTD) and 3-year periods.

The performance of the U.S. stock market turned out to be superior to the equities of most major developed and developing countries in the 3nd quarter and YTD. Developed markets, as measured by the MSCI EAFE Index, were down -0.95% and up +7.85% for the quarter and YTD, respectively. Emerging markets, as a group, declined by -5.94% and increased by +1.35% for the same time periods as reported by the FTSE Emerging Markets (EM) Index. Stocks of Chinese companies that represent a significant percentage of most emerging market indices declined by -18.13% for the quarter and -16.79% YTD (more details to follow). We continue to observe positive performance from other major emerging economies that benefit from higher commodity prices. These countries include Russia and South Africa with year-to-date performance results of +28.42% and +7.53%, respectively, as measured by the MSCI indices.

The yield on the 10-Year Treasury, which is frequently considered to represent the “market” interest rate, increased from +1.48% to +1.54% in the 3rd quarter of the year. This relatively insignificant total increase does not fairly portray the actual fluctuation in interest rates throughout the quarter. The yield was as low as +1.18% on August 4th and then gradually increased to +1.54% closer to the end of the period (+23% increase). Most of the rate swing is attributable to persistently higher levels of inflation and, as a result, higher potential for interest rate increases by the Federal Reserve Bank (the Fed). Most of the impact was felt by the technology sector, mid- and small-cap stocks and bonds with longer maturities.

The returns for the Barclays Aggregate Bond Index, one of the most common benchmarks for domestic bonds, was effectively flat for the quarter (+0.06%). The year-to-date performance of this index remains in the negative, -1.58%. It is worth mentioning the performance of most shorter-term fixed instruments with duration of less than three years remained in the positive for the quarter and YTD. In terms of our strategy, we continue to suggest maintaining most of your bond allocations in short-term and high-quality bonds. We believe there are limited risk/reward characteristics of investing in bonds with longer duration in this economic and interest rate environment. As a reminder, there is a strong inverse relationship between interest rates and bond prices.

In terms of the economic updates, the U.S. GDP increased by +6.7% annualized in the 2nd quarter of the year (the 3rd quarter results will be released at the end of October). This measurement was above the 1st quarter growth of +6.3% but lower than the market consensus of +7.00% to +8.00%. We expect the 3rd quarter results to remain positive as consumer demand and monetary policy continued to provide ample support for the economic recovery. However, we expect the growth to gradually slow down closer to the pre-COVID figures over the next several quarters. This level of economic growth, along with other market indicators, lead us to believe that we are in the mid-cycle phase of a normal business cycle. We note that more mature, cash flow “rich” companies tend to perform well in such environment.

The labor market, as measured by unemployment rates, has been improving over the past quarter. Most of the improvements happened in leisure, hospitality, retail, and professional services. The shortage of blue-collar professionals remains high, especially for certain professions in production and transportation. Average hourly earnings increased by close to +6% (year-over-year) and will likely continue to contribute to the persistence of higher-than-average inflation rates, currently at 5.3%, over the intermediate term.

From the market perspective, unemployment rates are of particular interest for multiple reasons. The most obvious impact is on decreased productivity and/or higher labor costs that are likely to have a negative impact on corporate earnings. The less apparent impact is on the decision-making process of the Fed. As many of you know, the main objective of the Central Bank is to achieve stable prices (i.e. control inflation) and maximize employment. The inflation targets have already been met with core inflation consistently running over the target of +2.00% over the past several months. Once the acceptable unemployment rates are achieved, interest rate increases become more probable. As a general observation, increasing interest rates are perceived to be a negative factor for many stocks, specifically those with lower quality earnings (i.e. companies that are expected to generate most of their revenues in the future). The chart below summarized the unemployment rates over the past twelve months. 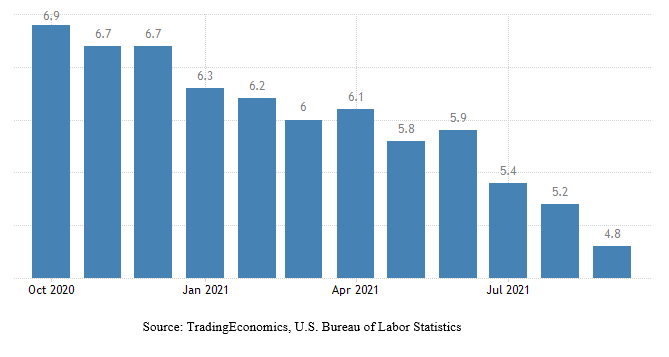 In terms of the Fed borrowing rate range, which is currently between 0.00% and 0.25%, the most recent September board meeting indicated a strong possibility of interest rate hikes as early as mid-2022. The assumption behind this expectation is that the economy, along with the unemployment rates, will continue to improve over the next two or three quarters. Once the Fed observes the initial confirmation of such improvements, it would begin to “taper down” or reduce its current bond purchases of $120 billion. Our expectation is that such reductions will be gradual, between $5 and $15 billion each month, which is consistent with the Fed’s overall approach. Even though any reduction in liquidity would likely be perceived as a negative by the market participants, we do not believe it will lead to a “Taper Tantrum” scenario that we experienced in 2013. As a reminder, at that time, the market’s reaction to the reduction in bond purchases was excessively negative on the belief that rapid reduction in liquidity would result in significant damage to the economy. 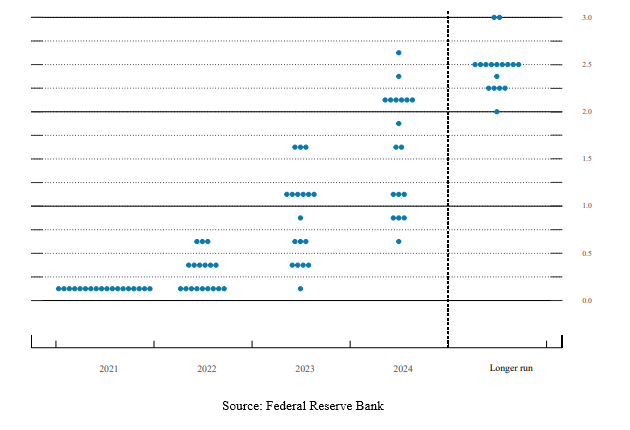 In the last quarter, we dedicated a considerable amount of our research time to understanding the current investment environment in China since it represents a significant percentage of investment opportunities in most emerging market funds. As we noted earlier, stocks of Chinese companies have been some of the worst performers this year. Large technology companies, private education holdings and computer gaming stocks have been under extreme scrutiny of the Chinese government. We are hesitant to make comments regarding the social justification of such actions as we want to limit our commentary mostly to financial impacts. However, it would be fair to conclude this unprecedented level of regulatory and government oversight made it increasingly difficult, if not impossible, to perform any sound fundamental analysis of these equites. The issue of potential default of one of the largest Chinese real estate developers, Evergrande, and other companies in the property sector only adds to the complexity of the situation.

We suggest that you consider reviewing and potentially reducing the allocation to emerging market equities in your portfolio. We understand that some investors believe the current prices of some of the Chinese stocks represent a bargain. One of the main arguments behind such beliefs is that the long-term prospects of these companies remain largely unchanged. We are open to adjusting our current thinking for any new information that becomes available.

Last, but not least, we feel obligated to comment on the current negotiations in Congress concerning the debt ceiling, infrastructure spending and the budget. The situation remains dynamic and mostly unpredictable which inevitably leads to more market volatility. Without making any specific comments about the goals and objectives of either political party, we would like to believe that no one wants the U.S. government to default on its national debt. There is no historic reference to an impact of such circumstances since our country has never defaulted on its debt obligations (to be complete, there were some issues with the redemption of government issued gold bonds and silver certificate paper in the middle of the 20th century). Considering the level of brinkmanship, we expect many of the decisions to be made in the last hour. Unfortunately, this is something we have grown accustomed to over the past decades.

As we mentioned earlier in this commentary, we believe our current investment environment exhibits multiple signs that are indicative of more volatility. Market turbulence and corrections remind us about the value of a disciplined and proactive approach to investment management. In fact, if properly approached, the market volatility may present great opportunities to either rebalance your portfolio toward your specific objectives in a tax efficient manner or acquire investments at lower prices. As Aesop, a legendary Greek fabulist, once noted: “It pays to be prepared.”