“I remember the $0.05 hamburger and a $0.40-per-hour minimum wage, so I’ve seen a tremendous amount of inflation in my lifetime. Did it ruin the investment climate? I think not.”  -  Charlie Munger

Happy, and healthy, New Year to you and your family and we hope that you are enjoying the winter season. As always, we will share our thoughts regarding the significant events that have occurred this quarter and share our current ideas and concerns (we also attached in Adobe Acrobat format for your convenience). Overall the 4th quarter of the year, as well as the entire 2021, were positive for the domestic stock market and most of its components. Small cap value stocks turned out to be the best performing equity style last year. We find it fascinating that the difference between the best and the worst performing style, small cap growth, is more than 32%. In terms of the sector performance, energy stocks turned out to be the best performers for the year. Real estate and financial sector, both cyclical and value oriented, were also some of the top performers in 2021.

Significant inflation concerns, interest rates and monetary policy, tight labor markets, foreign equity markets and the re-emergence of the new COVID variant, Omicron, were some of our top concerns at the end of last year. We expect most of these issues to persist in the first part of 2022 and perhaps ease off closer to the end of the year. We believe some of these concerns, specifically potential monetary policy “mistakes”, may lead to a market correction, decline of more than -10%, given the fact that we have not experienced one since March 2020. We will discuss these issues and potential impacts in this commentary.

The table below summarizes the performance of various domestic equity categories over the past 3-month, year-to-date (YTD) and 3-year periods.

The U.S. stock market continued to outperform most international developed and emerging equities in the 4th quarter and entire 2021. Developed markets, as measured by the MSCI EAFE Index, were up +3.13% and +11.23% for the quarter and year, respectively. Emerging markets, as a group, declined by -0.39% and increased by a mere +0.96% for the same time periods as represented by the FTSE Emerging Markets (EM) Index. We continue to pay particular attention to the stocks of Chinese companies as they represent a significant percentage of most emerging market funds (both active and passively managed). These stocks had one of the worst years since 2008 and finished in the negative by -6.73% for the quarter and -22.38% for the year. The FTSE EM Index remained in the slight positive mostly due to the annual performance of other major emerging market countries such as India (+22.40%), South Africa (+7.44%) and Russia (+18.92%).

The returns for the Barclays Aggregate Bond Index, the most common benchmark for domestic corporate and government bonds, was effectively flat for the quarter (-0.09%). The annual performance in 2021 remained in the negative, -1.67%. As we mentioned in our previous commentary, the actual performance range varied significantly depending on the maturity and quality of the bond category. Most bonds of higher quality and shorter duration finished the year flat or in slightly positive territory. Bonds with longer durations, specifically those that mature in more than ten years, were in the negative by as much as -5.0%. Above average level of inflation and expectations of higher interest rates were the major drivers of these returns. Overall, last year was a good example of how variable the returns of one of the most conservative asset classes can be over a short period of time.

The yield on the 10-Year Treasury, which is frequently considered to be the “market” interest rate, remained effectively flat in the 4th quarter of the year (increased from +1.48% to +1.52%). As a reminder, the yield on the 10-Year Treasury serves as a proxy for interest rates on mortgages and other longer-term loans and financial products. It is also perceived as a sign of investors’ sentiment about the economic outlook and direction. Perhaps even more importantly, it is considered to be one of the “risk-free” rates and frequently used in the present value calculations for stock price analysis. As a general rule, the prices of growth-oriented companies tend to decline when the yields on the 10-Year Treasury begin to increase. Many growth companies have uncertain and/or variable earnings and investors “demand” lower prices when the “risk-free” rate begins to increase. There are, of course, many other factors that can make this relationship inconclusive.

The U.S. GDP increased by +2.3% annualized in the 3rd quarter of the year (the 4th quarter results will be released at the end of January). This increase is significantly below the economic expansion that we experienced in the 1st and 2nd quarters of 2021, +6.3% and +6.7%, respectively. The decline was anticipated by most economists and market participants and, as a result, the markets were not “surprised” by the release of this data point. Without diving into the intricacies of the GDP calculation, it would be fair to conclude that most of the above average growth came from the “pent-up” demand for certain goods and services and various government programs. We expect the U.S. economic growth to normalize and return to the averages we experienced over the past several decades, +2.0% to +3.0% annual increase.

Unemployment rates continued to improve throughout the year. The official figure gradually declined from 6.7% in December 2020 to 4.2% in November 2021. We expect to see even more improvement in the first part of 2022 as we reach the “equilibrium” or “frictional” unemployment rate of 4.00% (3.5% in February 2020). It became quite apparent throughout the year that a significant percentage of the decline came from the fact that close to five million people exited the labor force, many decided to retire early or start new businesses. It remains to be seen how the so-called “Great Resignation” will affect the economy over the next several years. The chart below summaries the ratio of unemployed persons per job opening. 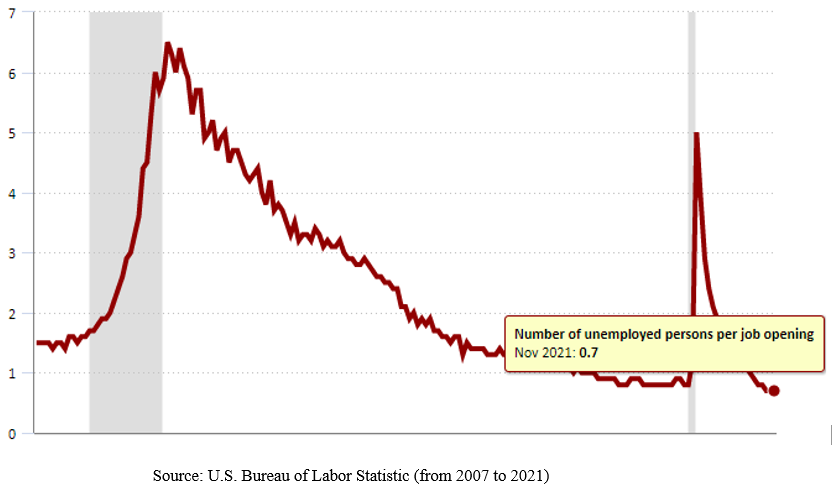 It would be fair to conclude, without any exaggeration, that the rapid increase in inflation we have been experiencing in the U.S. is on top of everyone’s list of concerns. As a reminder, the Consumer Price Index (CPI), increased from 1.4% in January to 7.0% in December of 2021. We are currently experiencing the highest levels of inflation since the early 1980s. We understand the CPI measurement is not perfect and impacts each individual or family differently. Some of our clients reported that they have not been noticing any significant changes in their expenses while our other clients complained that prices for certain items, such as groceries, are increasing “through the roof”. Our main focus is not so much on the economics of inflation but more on the potential impacts on the markets, specifically on inflation and interest rate sensitive asset classes such as bonds.

The Federal Reserve Bank’s main objectives are to “promote effectively the goals of maximum employment, stable prices, and moderate long-term interest rates.” Specifically, the Fed is targeting unemployment rates of 4.0% and the borrowing rate range remains between 0.00% and 0.25%. In one of the Fed meetings at the end of last year, the board indicated their objective to reduce the monthly bond purchases by $15 to $30 billion and potentially implement three or four rate hikes of 0.25% in 2022. We would like to point out that most of these announcements were highly anticipated by the market participants and were mostly reflected in the stock and bond prices. As many of you know, the markets are always “forward looking” and adjust based on the anticipated changes.

One factor that we believe is not fully “discounted” by the markets is that fact that the Fed’s balance sheet more than doubled since the beginning of the pandemic, from $4 trillion in 2020 to almost $9 trillion at the end of 2021. The Fed’s decision to begin increasing interest rates and eventually eliminate the monthly purchases will not have any significant impact on the balance sheet. Furthermore, the effects of the tightening policies may not be as effective as the Fed hopes them to be to curb the inflationary pressure. There is a possibility that the central bank would begin to wind down its balance sheet, potentially aggressively, to fight the “non-transitory” levels of inflation. As a side note, the Fed currently owns close to a third of the total Treasury and mortgage bonds on its balance sheet. Any potential “mistake” or “miscalculation” may have significant negative impacts on the market liquidity and, as a result, on both equity and bond markets.

We believe the monetary policy adjustments and potential impacts on the markets are the main known concerns for the first part of the year. We will be watching these developments closely. The chart below shows the increase on the Fed’s balance sheet from 2004 to 2022. 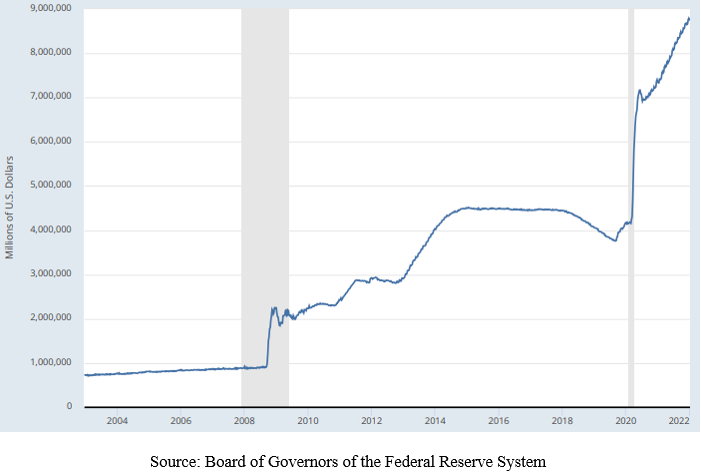 This commentary would not be complete without at least one mention of Omicron, the most recent coronavirus variant. We first learned about it on Black Friday’s short trading session. The market’s immediate reactions resulted in a “mini” correction that lasted until the middle of the following week. At least from the market’s perspective, it soon became clear that even though Omicron is significantly more contagious that the delta variant, its short and intermediate term impacts are not likely to be severe. Based on preliminary studies in the countries that were mostly affected by it, the new variant appeared to be less lethal and resulted in lower rates of hospitalizations. Some of the medical research heads of the prominent vaccine developers also spoke about the efficacy of the existing boosters and potential for a new vaccine development as early as in the first quarter of 2022. The markets calmed down by mid-December and stocks of some travel and leisure companies even increased in value over this short but turbulent period.

In terms of our strategy, we plan to rebalance most of our managed accounts in January (as part of our semi-annual rebalancing procedures). When appropriate, according to each individual investment policy, we plan to continue to overweight domestic stocks when compared to international equities and bonds. Our current inflation and interest rate environment makes most bond categories unattractive from the total return respective. We will continue to maintain adequate allocations to fixed income funds as a “buffer” for those of our clients who require ongoing cash distributions. These allocations also allow us to take advantage of market volatility if/when we experience a “true” correction.

We did not spend much time discussing the emerging markets in this commentary. It was one of our main concerns in the previous letter. Overall, we did not observe any significant improvements from the investment environment perspective in the 4th quarter of the year. Some of the emerging countries greatly benefited from the increase in commodity prices which positively impacted the performance of this category as a whole. We continue to believe that potential risks, such as continuation of government intervention, outweigh the potential benefits of making any significant allocations to this asset class at this point. We reduced our emerging market exposure throughout 2021 and plan to maintain at the same level in most of our managed portfolios.

For those of our clients with above average risk tolerance and/or insignificant portfolio cash needs, we may recommend inclusion of equities that tend to benefit from the environment of rising interest rates. These sectors include real estate, financial and energy companies. Healthcare is another candidate as many companies in this sector have strong market positions and long histories of significant dividend increases. We would like to make it clear that there is no perfect correlation between the prices of the securities in these sectors and economic factors such as inflation and interest rates. There will likely be other sector specific or “intangible” factors such as the market sentiment that may play an even larger role in determining the valuations of these stocks.