“Many people pride themselves on being ‘long-term investors,’ but acting deliberately when prices are bouncing around is not so easy.” - Peter Bernstein

We hope all is well with you and your family. As always, we will provide our thoughts on the events that happened this quarter and share our primary asset allocation ideas and concerns. The word “unprecedented” when describing the situation in Eastern Europe and related market volatility has been frequently used in financial and other media outlets. We very much hope for de-escalation and return to normalcy in the near future. However, as we draft this commentary, the updates from the region and negotiation outcomes appear to indicate that it could take some time for the conflict to be resolved. Any indication of a lasting, if not permanent, ceasefire agreement will likely significantly alleviate the uncertainty that has been haunting the market since the beginning of the conflict.

The market turbulence in the beginning of the year can be primarily attributed to the heightened expectations of interest rate increases and more aggressive action by the Federal Reserve Bank (Fed) to control inflation. As you can see on the following page, these expectations mostly impacted more growth-oriented equities. These securities tend to have less certain earnings and, as a result, are more susceptible to interest rate changes. More stable or defensive “value” stocks finished the quarter mostly in the positive. Not surprisingly, the energy and utilities sectors were the top performers for the quarter. Consumer discretionary and technology stocks finished the period at the bottom of the list.

The table below summarizes the performance of various domestic equity categories over the past 3-month, year-to-date (YTD) and 3-year periods.

Given the most recent developments, it may be challenging to focus on or even acknowledge some of the positive improvements in the United States (U.S.) and around the world. The unemployment rate, one of the main indicators of economic condition, has been reaching pre-pandemic levels, 3.6% as of March 2022. The decline in unemployment rates has been positively impacting wage growth, 5.1% year-over-year, albeit below the overall rate of inflation which finished the quarter at 7.9%. According to the International Monetary Fund (IMF), the U.S. economy is expected to grow by +4.0% in 2022 (real GDP annual percentage change). The global growth is expected to reach +4.4% this year. Based on the data from Fidelity Investments, the U.S., Eurozone and other major developed and developing nations are still in the mid-cycle phase of a normal business cycle. China is one notable exclusion from this observation. See the graph below for details. It is still premature to conclude that Coronavirus is no longer an issue, but the number of new infections has been gradually declining since the beginning of the year in the U.S. and many other countries around the world. We will discuss some of these issues and potential impacts in more detail.

Somewhat surprisingly, the performance of the major domestic and international equity indices turned out to be very similar in the first quarter of the year. The end result, however, does not fairly represent the level of volatility that was experienced by the international equity markets, specifically European and Chinese stocks. The MSCI EAFE index, one of the most common benchmarks for developed international stocks, was down as much as -15% in the beginning of March. Stocks of major publicly traded Chinese companies were down by almost -28% and finished the quarter in the negative, -15.57%. It would be fair to conclude the U.S. markets turned out to be the most resilient to the exogenous events for the quarter.

As you can see from the table above, U.S. bonds underperformed domestic stocks in the first quarter of the year. It is notable that domestic bonds, as a category, did not provide the protection that many investors seek by allocating to this asset class. As many of you know, bond  allocations are generally designed to serve as a “buffer” or “ballast” in a diversified portfolio and usually are not expected to provide any significant contribution to the overall growth of your funds. There are multiple reasons behind such performance. The most important consideration is the market’s expectations of more aggressive monetary policy decisions by the Fed to fight inflation. There is an inverse relationship between interest rates and bond prices. Another reason, which is just as important, is the investors’ allocation preferences in times of above average inflation. With low yields and limited inflation protection, many portfolios, including our managed allocations, were rebalanced to other asset classes, such as dividend-paying stocks, to better preserve the purchasing power. We expect the performance of domestic bonds to remain under pressure for at least the next few quarters. We limit our fixed income allocations predominantly to shorter-term issues that are less sensitive to interest rate fluctuations.

The markets paid close attention to the latest Fed meeting. There were many speculations in terms of the policy adjustments including the frequency and severity of potential interest rate hikes. The Fed has accumulated close to a quarter of the U.S. Treasury market through asset purchases (i.e. quantitative easing). Any possible reduction of the Fed’s almost $9 trillion balance sheet is considered by many as impactful on the markets. Nevertheless, the Fed meeting minutes presented perhaps the “softest” possible language that the markets anticipated. The Fed rate increased by 0.25% with anticipation of five or six additional rate hikes this year. No immediate reduction of its balance sheet was announced and related discussion will be resumed in the next meeting. As a result, the Nasdaq index, which is heavily invested in interest rate-sensitive technology and consumer discretionary stocks, rallied by almost +4% on the day of the announcement.

To finish our commentary on the Fed policy and related updates, we will discuss the inverted yield curve arguments that have been publicized in many financial media outlets. Under normal circumstances, you would expect the yields of Treasuries with shorter maturities to be lower than yields on intermediate- and long-terms issues (i.e. upward sloping curve, see chart on the following page for details). The comparison between the 2- and 10-year Treasury notes is the most widely watched yield curve indicator. At the end of the first quarter, the yield on the 2-year notes was 2.44% and above the 10-year note’s 2.38%. Historically, inversions in the yield curve indicated a recession possibility. We pay close attention to this measurement but other factors, such as improvements in the labor market and overall economic conditions, are strong indicators of the opposite. Without diving into more detail, there is a strong possibility that shifts in the 2-year yields are mostly due to the anticipated Fed rate increases throughout that year as we discussed earlier in this commentary. 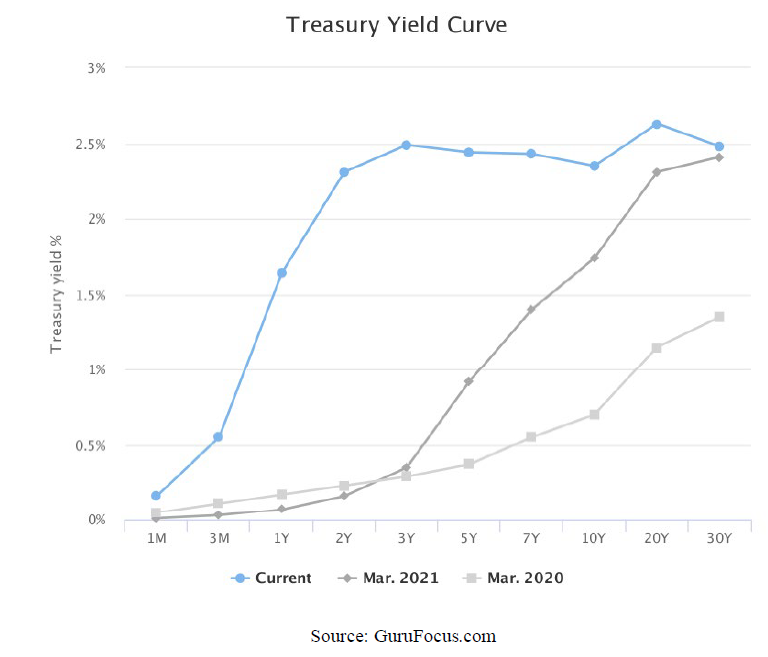 In terms of the domestic stock market, the difference between the best (mid-cap value, +4.85%) and worst (mid-cap growth, -16.01%) equity styles turned out to be almost 21%. This variability is relatively common in times of market volatility and presents potential opportunities for strategic portfolio adjustments. We believe that some of the “value”-oriented sectors such as financials, real estate and healthcare will continue to benefit from the current market environment. We are somewhat cautious on the energy sector which is the top performing “value” category this year. Energy prices are notoriously cyclical and more susceptible to geopolitics and global shifts in supply and demand than the actual ability to generate new capacities. The chart below summarizes the prices of crude oil and gasoline from 2010 to 2023 (forecast). 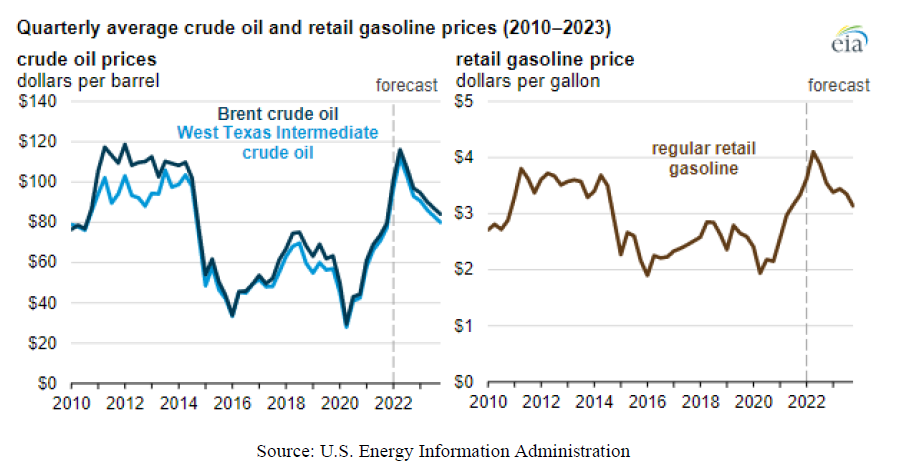 We believe the latest market volatility created some good entry points for growth stocks and investors who have higher risk tolerance and/or longer investment time horizons. There is no universal definition for this category but higher than average revenue growth rates, less predictable earnings and sensitivity to interest rate changes are some of the most common characteristics. Growth stocks were significantly impacted by the latest market volatility and uncertainty about the magnitude and frequency of interest rates hikes. As a result, the valuations of many companies, particularly those with larger capitalizations, became more reasonable when compared to the end of last year. The “dollar-cost-averaging” (DCA) or periodic rebalancing are likely the most optimal strategies for those who want to increase their allocations to growth stocks.

In terms of our strategy, we plan to partially rebalance most of our managed accounts in April. We expect most of the adjustments to be less significant when compared to our semi-annual rebalancing in January and July of each year. When appropriate, according to each individual investment policy, we plan to adjust the allocation to different equity styles based on the thoughts and ideas discussed in this commentary. We continue to maintain overweight positions in domestic stocks when compared to international equities and bonds. However, we do not plan to make any significant additional allocations to “value” or dividend-paying stocks at this time.