“With every new wave of optimism or pessimism, we are ready to abandon history and time-tested principles, but we cling tenaciously and unquestioningly to our prejudices.”  -  Benjamin Graham

As we head into the dog days of summer, we hope that everyone is enjoying the warm weather and summer months. With Americans spending time outside gardening, at the beach, or hiking a national park, it’s easy to forget some of the unpredictability of financial markets this year. Over the past quarter, most sectors of the market have been volatile to the point where the S&P 500 officially entered a “bear market” territory, signifying a 20% drop in valuation. Many factors are at play, including the ongoing conflict in Eastern Europe and pandemic lockdowns in China, but the issue on many Americans’ minds has been rising prices and persistent inflation across all sectors of the economy, most notably in food and energy.

In a hawkish turn for the Federal Reserve, the central bank is acting rapidly and aggressively to address these inflation concerns by ending their quantitative easting (QE) program, raising the Fed rate and planting expectations for additional rate hikes for the rest of the year. Bond markets have underperformed and concerns about shrinking GDP, failures in the supply chain, shortages of labor, increased labor costs, and increased housing affordability due to increased interest rates, have caused equity markets to underperform as well. As a result, according to Morningstar, for only the second time in the past 40 years, both bonds and stocks have posted losses for two consecutive quarters.

The table below summarizes the performance of various domestic equity categories over the past 6-month, 12 month and 3-year periods.

Keying into individual sector returns, growth-oriented equities were impacted the most, with small-cap growth-oriented stocks turning negative over a three-year annualized return (-0.14%). Typically, in times of economic expansion, growth-oriented equities steadily outperform more mature or value-oriented companies, but with the market precariousness it is finally value’s time to shine. For example, though growth has outperformed value for the last five years, value has performed better than growth in the most recent quarter. However, it is also worth noting that while value stocks have outperformed the rest of the sectors, this category still has a negative 12-month return and is down 7% year-to-date.

As previously mentioned, bonds performed similarly to equity securities as a result of the Federal Reserve’s actions to increase interest rates and potential for additional rate hikes. Considering general economic concerns, investors moved out of riskier bonds into safer havens such as Government-guaranteed Treasuries. Additionally, inflation protected bonds – such as Treasury Inflation Protected Securities, otherwise known as TIPS – were not able to come away completely unscathed and were also impacted by rising interest rates. Investors that focused on lower duration, highest credit rating bonds, like T-Bills and short-term corporate bonds, ended up faring better than other market participants.

Despite volatility in equity and fixed income, there were some relatively bright spots in the market. In particular, while commodity funds have not had large returns over the past decade, with oil and energy prices soaring they were able to have their moment in the sun. Natural gas, wheat and nickel have also contributed to these gains, boosting commodity prices. 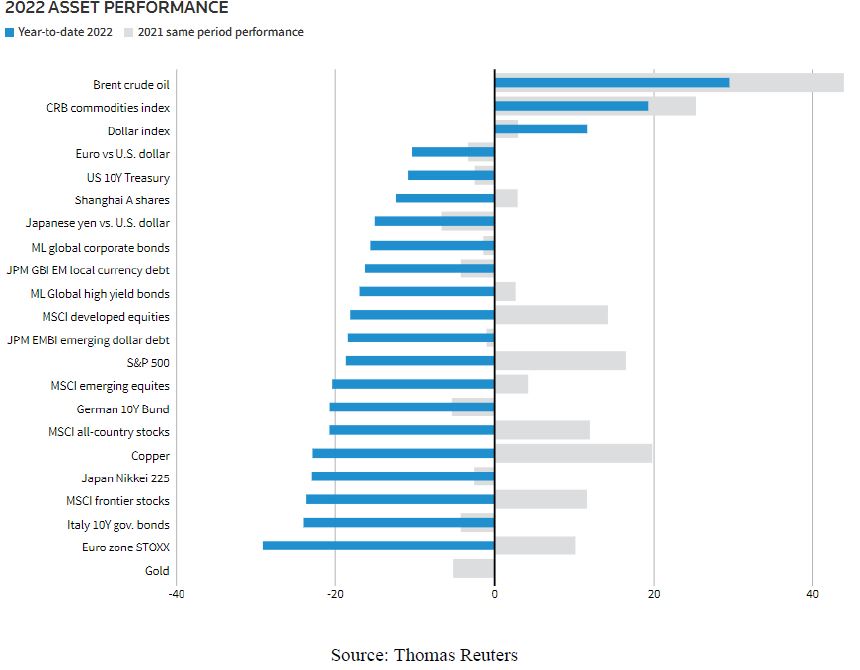 Some of the volatility can be attributed to economic factors affecting the overall market sentiment for investors. One metric in particular that economists track is called a ‘yield curve inversion’, which occurs when the yield of the two-year treasury bond is higher than that of the 10-year treasury bond. The curve has grown flatter in the previous few months but has not yet inverted. Housing prices and related data are also important in determining the direction of the economy. According to Freddie Mac, mortgage rates have surged to over 6%, the fastest and quickest rate increase in decades, and housing prices have not declined to meet these rates. As such, houses are as expensive as they have been in the past two decades. As shown in the chart below, with interest rates on the horizontal axis, loan size on the vertical axis, and years plotted on the graph, 2022 is well above other recent years, meaning that consumers are experiencing very high housing prices while interest rates are still historically above average. 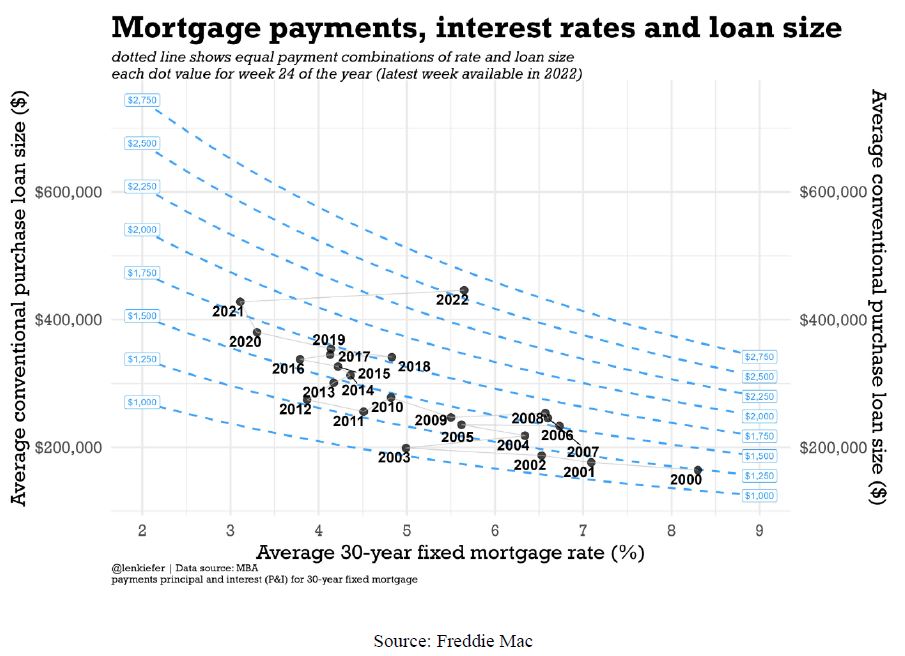 Given these market signals, economists are entertaining the real possibility of a recession, defined by the National Bureau of Economic Research (NBER) as two consecutive quarters of decline in real GDP. According to J.P. Morgan, first quarter GDP missed expectations at -1.6%, the first contraction in GDP since the beginning of the pandemic, and although results haven’t yet been released for Q2, there is a possibility that with another decline in GDP we may have already entered a recession. These concerns are certainly contributing to the current equity and bond market performance.

One potential outcome of the current environment could result in a proverbial “Catch-22” scenario. In this situation, businesses and consumers expect an economic slowdown and, as a result, reduce their spending – which in turn leads to less business expansion, less hiring, and less spending overall. These contractions lead to less pressure on the currently high demand for goods and services and, consequently, this eases inflationary pressure. As inflation begins to decline, the Federal Reserve’s approach to interest rate hikes becomes less aggressive. This, in turn, may lead to so called “soft landing” scenario when the economy is slowed down just enough to reduce inflation without any severe impact on the economy (i.e., mild recession).

While a market downturn may be concerning to most investors, declines in the equity and fixed income markets have actually opened up many areas of opportunities to investors eager to purchase securities considered ‘undervalued’. Comparable to six months ago, many equity types currently have more reasonable valuations, especially growth-oriented large-cap domestic stocks. In fact, according to J.P. Morgan, “Price to Earnings” or “P/E” ratio, which is used to gauge the overall valuation of equity investments, is now lower than the 25-year average as can be seen in the chart on the following page. Savvy investors may want to use this opportunity to purchase such stocks at a meaningful discount. 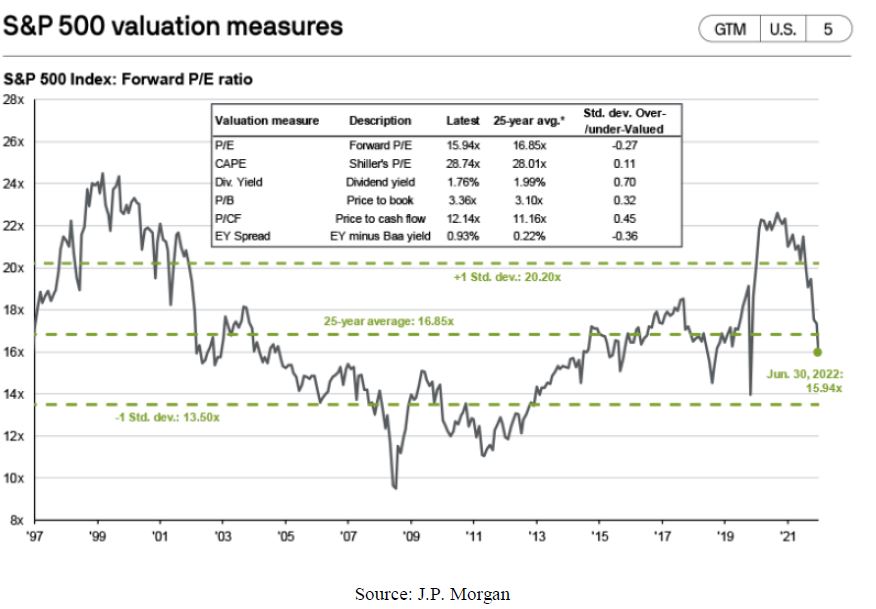 Occasionally, investors flock to safer options during a market downturn, but during times of market volatility investors may want to explore all options at their disposal. Of course, investors with short term time horizons can take advantage of increased interest rates courtesy of the Federal Reserve, investing in high yield online bank accounts, certificates of deposits or short-term government bonds. While these are only short-term solutions, most options are offering much better yields than even a year ago given the recent interest rate increases. Other investors concerned about inflation may seek riskier but higher yielding options like corporate bonds or I-Series government bonds. Then again, the long-term investor, as previously mentioned, may use the volatile market to consider equity options being offered at a discount. The table below summarized the most recent average yields for some of the fixed income investments with lower risk.

In terms of our overall market outlook, we believe the market volatility will likely persist until we see more clarity on inflation and interest rate direction. The markets will continue to adjust their expectations and deal with the related uncertainty. We strongly believe a sound financial plan that takes into consideration your specific situation coupled with a personalized investment strategy is the best approach to deal with current market conditions. Long-term focus and unbiased analysis of the available information is imperative to your financial success.

In addition to strategizing on asset allocation, volatile markets can be an excellent opportunity for investors to consider some common predispositions that may be negatively impacting their investment decisions. Some of the common Behavioral Finance issues are briefly discussed below.

One of the most common dangers is “confirmation bias”, in which investors seek out information that confirms their existing beliefs and ignoring information that contradicts these views. For example, an investor may have a strong conviction that an asset such as a risky small cap stock is poised to increase in value in the next year. This person may gravitate to web forums, social media posts, influencers, and news articles that encourage their opinion. As a result of this bias, the investor may miss out on other opportunities that contradict their point of view. On a larger scale, this bias can result in significant opportunity costs that may have lasting impact on the entire portfolio.

Investors should also consider whether they are subject to the “anchoring” phenomenon. Anchoring causes investors to believe in an arbitrary benchmark and tie future decisions to that price. If an individual buys a stock at $100 that since then has declined to $30, they may believe that it is reasonable to assume that it must return to that $100, although there is not any credible evidence to suggest that it will happen in a short period, or ever. Investors that keep journals documenting why an individual may select a security, and what circumstances have changed, can more objectively make decisions based on their purchases and sales.

Compared to “confirmation bias”, which leads investors to possibly take more risks, “loss aversion” may affect investors in the opposite direction. Loss aversion is the tendency to avoid losses rather than focus on achieving gains by investing predominantly in safe assets. Psychological experiments have provided evidence that individuals tend to feel the pain for losses more so than an equivalent gain. In other words, a portfolio decline of 10% may result in a stronger negative psychological impact than a positive feeling after a gain of equivalent magnitude. Inability to take calculated risks caused by excessive risk aversion may severely impact investors’ long-term performance results and overall financial plan.

Strategically, we suggest that you consider rebalancing your portfolio in accordance with the current market conditions and your specific investment policy. Some clients may benefit from tax loss harvesting strategies to reduce taxes paid on future capital gains in taxable accounts. To maintain the allocations per the targets in each investment policy, the proceeds are to be reinvested immediately in similar types of investments. Any unused harvested losses can be carried forward in the future indefinitely to offset any gains. Market volatility tends to create many opportunities for tax-minded investors.

For those of our clients with longer time horizon and/or above average risk tolerance, we may recommend considering increasing the allocation to domestic large cap growth equities. As we mentioned earlier in this commentary, many of the companies in this category are trading at significant discounts when compared to their prices at the end of 2021.

Based on the overall level of uncertainly and general economic conditions outside of the U.S., we also may recommend considering underweighting our international allocations and revisiting this approach closer to the end of the year with a focus on the fundamentals of these investments.

On the fixed income side, we suggest that clients consider focusing on short(er)-term investment grade and government bonds in the second part of the year. However, as investors observe positive changes in yields of other bond categories, they should consider adding them to portfolios closer to the end of the year. This decision will be mostly impacted by the Fed’s policy and interest rate direction.